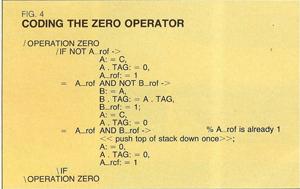 I regularly reported our progress to Ron Tucker, and informally to John McClintock. Tom told me we might have to slip the schedule because E-mode required some changes to the MCP and it was decided to write a new MCP compiler called NEWP. Because the software group wanted to fix some flaws in the compiler for all future machines, they decided the right point to make the changes was with the B5900. Since the B5900 was not really funded, getting MCP programmers assigned to make the changes was harder than originally thought. We met with Bob Hall, who was in charge of MCP development. It looked like we were facing a two to three month schedule slip. Don Swanson, the software engineering manager, was a big supporter of E-mode and the B5900. He told us he would do everything in his power to avoid the schedule slip, but in short order it turned out he would not have to. The trend in data processing and distributed processing was about to go our way.

Previous Next
July 12th, 2018|Jack Allweiss|Comments Off on More about E-mode compiler