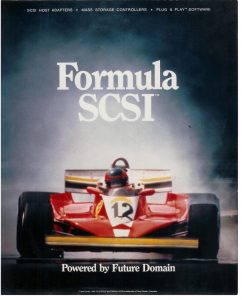 I started working on The Future Domain Story about ten years ago. I had finished the story of my career at Burroughs Corporation and the B5900 mainframe computer, and was ready to move on to the company I founded after leaving Burroughs and what I felt was my greatest accomplishment. Then as I began writing I decided that I was still too close to the subject. I wanted to get more perspective so I tabled the project. Now, ten years later and twenty years after I sold the company I am ready to tell the story of Future Domain. The world of startup companies has changed enormously giving me a new perspective on what I had accomplished. Starting a company in the days before the Internet, Crowd Funding, Angel investing, and Incubators was a very different affair. The process is far easier today than it was then, which is an advantage for the entrepreneur but it is also a drawback.

I felt the crucible of entrepreneurship was far hotter “back in the day”. As a result, the companies that came out of that crucible were usually not one hit wonders like many companies that have sprouted from crowdfunding. Is this good or bad? I will let you be the judge. I feel that telling the story of Future Domain, a company that came to life, went through good times and bad times, and ultimately was purchased because of its true value, revenues and profits, is a story that will help you with that decision.
The modern entrepreneur might find some of the lessons in the story of value, especially since in the current environment those lessons may not be learned from experience. And for those who are not interested in founding a company but instead studying the history of technology, this story will fill in parts of the puzzle yet untold. Finally, I hope I have made this an interesting read.