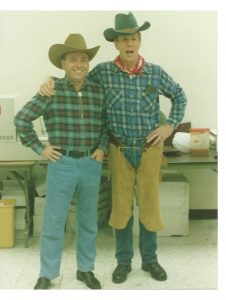 After I relieved Al of his position as VP of Engineering and board member, I did not terminate him. Al owned 10% of the company because of the founders’ share I gave him. At that time he did pay for his shares with some test equipment he gave to the company, but its value was less than $1,000. The main reason he got the stock was as an incentive.

Al blamed me for the decline in the company, and maintained he had nothing to do with it. After the start of 1991 Al did not contribute to the company at all. I asked Al if he wanted to go back to being a designer, but he refused. So instead of terminating him, I had put him in his new position, Strategic Planning. I asked him to look at new product opportunities for the company. To show good faith I sent him to Europe to visit customers with our sales team. I thought he might get some insight from our customers. When John Banks, Future Domain’s European sales manager reported back to me he said that Al did not do much listening, instead he liked to lecture the customers on what they should be doing.

When Al got back he filed a report, but there was nothing actionable. Several of the recommendations were not practical. He was not happy. He then asked me if he could find a buyer for the company. Al told me that he felt I was mismanaging the company, and he would like to run it. I gently let him know that when he ran Engineering and Marketing he almost ran the company into the ground. He did not buy that. He said it was my fault for hiring bad sales people. I told him that I had no objection to selling the company if he could get a fair price. What was a fair price? Summit Partners had invested $2.45 million dollars for about 30% of the company. In the venture capital world, the goal is to “hit a home run”. A home run is at least four times your investment (you can guess what a single, double, and triple are!). I wanted to be associated with a successful investment, so I told Al that he needed to find someone willing to pay about $21 million for the company that would give Summit its home run (adding in the 7% dividend we paid them). I also told him I would not run the company if it was sold. Al said that was OK, his goal was to run the company for the new buyer.

Al spent about almost a year trying to find a buyer. Finally he found one in mid 1991, a company that acted as a conglomerate and owned several different kinds of companies. The offer was for about $12 million, which was well short of a home run. However I was getting a lot pressure from Summit Partners about selling, so I decided to entertain the offer.

Al and his buyer met with me in my office. We had a good discussion, and the buyer asked if he could get back to me with some follow on questions. I agreed. The next day he called and asked if I could meet him in the lobby of his hotel without Al present. At the meeting he said they were very interested in the company, but only if I would agree to a five year employment contract and retain ownership in the company. I told him that I thought the plan was for me to leave and Al to take over. He laughed; he said that they would never invest in the company if Al were to run it. Future Domain and I had impressed him, Al did not. I told him that one of the reasons I was even entertaining a sale was because of my health, and as a result I could not agree to a five year employment agreement. He understood, and we parted company.

The next day I reported my meeting to Al. He got red in the face and accused me of trying to scuttle his plan. I told him to call the buyer and find out exactly what happened. He did, and later came to apologize. By now I had had enough, I asked Al to find another position within sixty days or I would have to terminate his employment. He left Future Domain about three weeks later.

I did not hear anything about Al until about two years later when one of our employees said that he had run into Al and that he had gone to work for one of our small competitors. I was a little surprised because Al had a 10% stake in the company, and he would profit handsomely in a sale, so why would he want to undermine our success? But that was Al.

As far as Al’s track record at the company, he was instrumental in our early design success, but as the company grew he was not up to the task of being a Vice President. As an example of this, during the five years he was VP of Engineering we developed two chips, the TMC-950 and the TMC-1800, which had a lot of problems and were behind schedule. In the following five years, we developed five chips, more than twice as many and with far more complexity, all delivered on or close to schedule. I blame myself for this, not Al. I should have kept him as a senior designer and technology expert, not a manager. I should have hired a seasoned manager like Erv Hauck to run engineering as we were growing. I made a serious mistake. I let familiarity with a person (friendship?) cloud my judgement of the true skill he had for the job.

Another lesson from this experience and my earlier experience with Bawn McCrea is that often founders stock is not the incentive you might think it is. As a majority shareholder you may place a high value on illiquid private stock holding, but rarely do minority holders unless they also have a significant financial stake in the company. In the end Al made over $2 million dollars from the sale of Future Domain. He then promptly quit his job and became a Preacher, an excellent job for someone with his temperament.