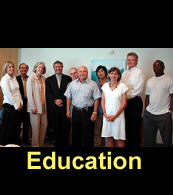 After the sale of Future Domain in 1995 I chaired the Technology Committee for Mission Viejo High School. I helped develop three programs. Information Literacy Program (ILP) was designed to leverage computing power students had at home, supplemented with school library resources. Teachers in the program gave at least four assignments per semester that required the use of Internet research resources in exchange for a laptop and internet access in there classrooms.

The second program is Anytime Anywhere Learning, which has been renamed E-core. This program allows students to bring Laptop computers to school. E-core classes were developed in the core curriculum including English, Social Studies, History, and Science. The school provided the network infrastructure and the students brought the laptops from home. About 25% of students were in the program when I left.

The third program was Digital High School. This was a state program, but MVHS and other district high schools implemented a new and different architecture which I developed, using cheap, inexpensive and robust terminals in the classroom and Windows Terminal Server computers. Using my contacts at Unisys from the Burroughs days, I had Unisys donate hundreds of hours to help develop the system for the school. The state eventually recommended the MVHS DHS architecture to all school in the state and the school became a demonstration site for the technology.

I Served on the Pepperdine University Seaver Board of Visitors, and as Chairman of the Chapman University Science and Technology Advisory Committee. At Chapman we developed a new major in Medical Communications fulfilling a goal I set at David’s funeral, better communication between the medical community and patients and family. We also launched the program in Bioinformatics, which will hopefully lead to new treatments for cancer and other genetic diseases.