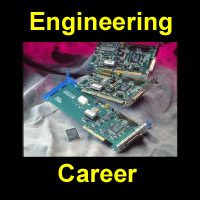 I passed the FCC First Class Radiotelephone Operators License exam when I was 16, allowing me to work as a broadcast engineer at WJLB AM/WMZK FM radio, and WJBK-TV in Detroit.

When I attended Wayne State University, I worked as a summer intern at Sinai Hospital and developed the first computerized scintillation counter analysis software. Scintillation count was used to determine kidney function by injection of a radioactive dye and then measuring the rate at which it was flushed by the kidney. At that time the readings were printed on a paper tape and then the rate was calculated by hand. In this project I interfaced the counter to a DEC mini-computer which produced a tape. I then assembled a program to analyze the data on a mainframe. Using this technique results could be obtained in a day or two, where previously they required a week to ten days.

I worked on the interface circuit for early ultrasound arterial measurement device at Wayne State as a research assistant. The device is now standard equipment in OR’s and emergency rooms, and provides a picture of the artery so that catheters can be accurately inserted without damaging the artery wall. At the time we would use dogs and surgeons from Wayne State Medical School to test the device.

At MIT where I attended graduate school I worked as a research assistant at Lincoln Labs, a facility of the Department of Defense, on a classified project that was vital to the security of the nation relating to ballistic missile defense.

My thesis project at MIT, which was in some ways related to the classified work, involved building the first specialized computer capable of generating speech (speech synthesis) in real time, called the SSP. The architecture of that computer is now the basis of almost all single chip speech signal processors used today.

At Burroughs Corporation I lead the team that developed the first successful large scale computer memory made of semiconductors by utilizing new and novel error correction algorithms and architecture. I proposed, developed, and managed the development of the Burroughs B5900, which led directly to the Burroughs A series of mainframe computers. This computer architecture, known as E-mode, is one of only three mainframe architectures to survive into the 21st century.