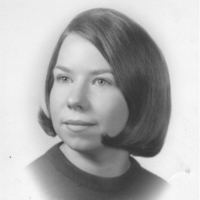 (APROXIMATELY THE FIRST 10 BRANCHES WERE CREATED PRIOR TO MY INTEREST IN GENEALOGY.   I HAVE ADDED TO AND UPDATED THE LIST.  IF YOU LOOK THROUGH YOU WILL SEE  WHERE SOME BRANCHES HAVE BEEN RESOLVED.  THE ULTIMATE GOAL IS TO TIE ALL BRANCHES INTO BRANCH ONE, MAKING THE PATRIARCH THE SAME FOR ALL.  THE PATRIARCH COULD GO BACK 6, 10, OR POSSIBLY 12 GENERATIONS.  CONTINUED RESEARCH AND DNA TESTING WILL HELP TO FACILITATE OUR DISCOVER).

BRANCH 24: MERGED INTO BRANCH 1 AS A RESULT OF ANALYSIS OF US IMMIGRATION PASSENGER LIST DATA. (NOV 2012)

BRANCH 42: Beile (age 19), mother Elke (age 47), and Pesche Altweiss (age 10)sailed from Hamburg to Liverpool to Hull aboard the ship ‘Flamingo’, 14 December 1886. They came from Kolbuszowa, Galicia and their final destination was New York.

NOTE: Many years ago a list of Allweiss Family “Trees” was started by cousin Gershon Allweiss. At that time it had about 12 “Trees”. Through his preliminary hard work and organization I have been able to build upon that foundation. I have renamed them “Branches” as each is an offshoot a core single “Allweiss Tree”, regardless of the spelling (Allweiss, Allweis, Alweiss, Alweis, Alwais). Please review and see if you can solve a piece of this puzzle. Go to www.hoaroots.org to see the all Allweiss cousins. Contact me with your questions or information.

Rabbinic Research and the Allweiss Family

When I first began family research on the various Allweiss branches, I was provided with a sheet by various cousins who assured me that the Allweiss descendants were indeed from rabbinic lineage.  Over the years I have received e-mails complaining when I added the rabbinic lines onto the www.hoaroots.org website.  “Where’s the proof?”  They would write.

The following is a list showing the generations of rabbinic lines, starting with the oldest that I worked from:  (NOTE:  This list was provided to me by U.S. Allweiss cousins, as well as U.K. cousins when I was in England and Scotland a few years ago).

I have researched these names in two books that document the rabbinic lineage in Europe.  The first is “The Unbroken Chain, Volume 1 and 2 by Neil Rosenstein.  This book provides “Biographical Sketches and Genealogy of Illustrious Jewish Families from the 15th-20th Century”.   On page 1016 of Volume 2 is the beginning of the Ropshitz (Ropczyce) Dynasty of the Horowitz Family.  According to this lineage, Reb Naftoli Zvi Horowitz’s youngest son, Reb Eliezer Horowitz became Admur of Dzikov in 1848, and he died in 1860.  He married the daughter of Reb Jchiel Michel Rosenfeld of Rava-Ruska.  After this there is no reference to Reb Yisroel of Barnov, or Elezer Shendlinger.

In the book, “Latter Day Leaders, Sages, and Scholars”, by Emanuel and Neil Rosenstein, I could not locate any data that could verify a rabbinic line.  I have also researched at numerous websites for a possible connection.  To date I have been unable to find a link.  This does not mean that it isn’t true, but without DNA or verifiable documentation, the reality of a rabbinic line is highly questionable.  As a result I have taken off the rabbinic link and the oldest “Allweiss” connection would be Eliezer Shendlinger, father of Avrom Yakov Allweis  (Alweiss being his mother’s maiden name).

I welcome any additional research or discussion that can shed additional light. 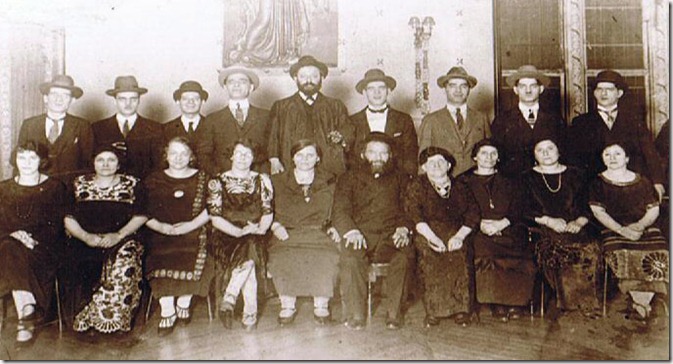 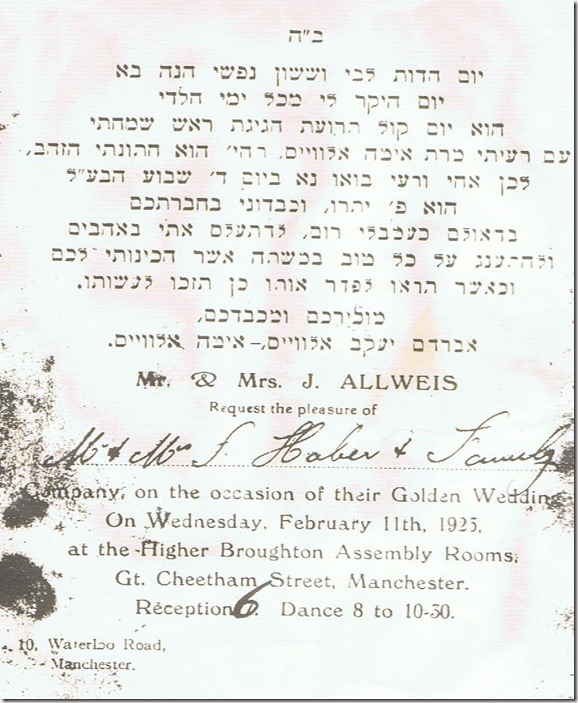 A copy of the invitation sent out to guests to attend the Golden Anniversary Party of Avrohom Jacob Allweiss and Itta Wadler Allweiss on Wednesday, February 11, 1925 In Manchester, England (Invitation contributed by David Conway).

Homeland of the Allweiss Family 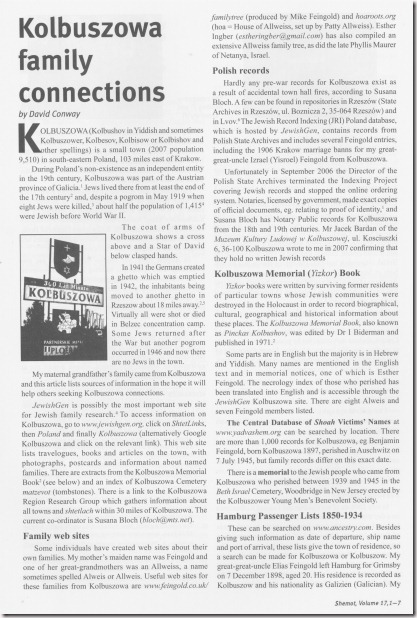 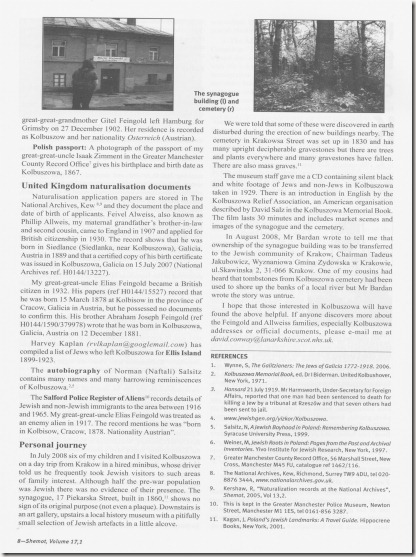 Published in an issue of “SHEMOT”, The Jewish Genealogical Society of Great Britain, March 2009, Vol. 17, 1. Contributed by David Conway.

As children of Adam and Eve, we are all related to each other, so why study ancestry?   Because it is close family relationships that matter to most people.  The Christian people of Europe can often trace their ancestry back to the 16th century, and even earlier for uncommon surnames.  Jews did not adopt surnames until the 19th century, so tracing ancestry is much more difficult for us.

Allweiss (Alweiss, Allweis, Alweis) is a relatively uncommon surname, so it is ideal for tracing, however because of the particular trait of Jews not having surnames before the 19th century, the trail runs cold by the mid 1800’s.  That is where the Allweiss DNA project comes into play.

On hoaroots.org, the Allweiss family ancestry is documented.  Nine major “branches” of Allweiss’ are documented.  The family lore is that a “common patriarch” of the family existed in the late 18th or early 19th century who is the common ancestor of all the various branches.  But how do we prove that?  There are no records that exist earlier that about 1850, and most likely the Allweiss name was not adopted until just before that time period.

To solve the mystery we employed the latest technology, Y-chromosome DNA testing.

What DNA testing tells Us

DNA testing tells us if two people share a common ancestor; father, grandfather, great grandfather etc.  It can also tell us the time period that ancestor lived.  It cannot tell us the name of that ancestor, or their age, or exactly where they lived.  It can tell us the ancestor’s roots (where they migrated from).  So if two living Allweiss’ on different branches have Y-DNA tested, we can tell, with a certain probability, when their most recent common ancestor lived.   It is important to understand that the most recent ancestor is the important one; after all, we all go back 12,000+/- years to Adam and Eve, so if it is the earliest ancestor you are looking for, well you already know that answer!

Up until August of 2012 on hoaroots.org Zyga Allweiss was on Branch 1 of the family and Nathan Allweiss was on Branch 3.  The question we wanted to answer was, when back in time do these branches merge?   If the common ancestor was in recent times (after 1750) then most likely he lived in or around what is today called Jashlany Poland and most likely the cousins of these two branches were acquainted with each other into the 19th century.  If the common ancestor was in antiquity (say before 1650), then the family ties would not be as close and the origin more muddled.  DNA testing will give us the answer.  We tested Zyga and Jack Allweiss (Zyga’s brothers son), and Nathan and Gershon Allweiss (Nathan’s son).  The testing of the later generation (Jack and Gershon) simply increases the confidence level of the test results.  We use Zyga and Nathan as the root for the search.

The Y-37 test confirmed we were closely related, but the common ancestor prediction was over a relatively wide timeframe, 1612 to 1787.  To tighten up the result, we needed to test more points on the Y chromosome by upgrading the test to Y-67.

Understanding these results and the historical data

If you follow the historical record in HOAROOTS.ORG for Branch 1 (Zyga) and Branch 3 (Nathan) Allweiss you find two generations that are fully documented,  Yaacov and Mendel on Branch 1, and Max and Gabriel on Branch 2 (see figure 1).  Three generations back from Zyga we have an unknown ancestor, and three generations back from Nathan we have Noah, but no real documentation for him (DOB-DOD), we can thus make the assumption that Zyga and Nathan are not related within three generations (third cousins).  The DNA tests give us a probability of a common ancestor within a specific timeframe.  On FamilyTreeDNA a test called FTDNATip uses a large database to compute the percentages.  It is assumed that two people who share the same surname and geographical ancestry have a high percentage of being related within the indicated number of generations if the Tip results indicate a 70% probability, and are almost certain to be related at the 85% or greater timeframe.    The data indicates that Zyga and Nathan are most likely 6th to 9th cousins, and that Mendel and Gabriel were most likely 3rd to 6th cousins.   Finally we now know that Branch 1 and Branch 3 most likely converge to a single common male ancestor sometime between 1787 and 1837.

In order to incorporate these results in the HOAROOTS database, Patty Allweiss had created “DNA Ancestors” in the family tree.  Using the documented DOB in the database, she created individuals that fit into the family tree as predicted by the DNA tests.  The most important DNA Ancestor is the Common Patriarch who lived in the 1780-1820 timeframe as predicted in the DNA test of Branch 1 and 3.  Later ancestors are created to “fill in” to record until the documented ancestors are reached.

There are several other branches of the Allweiss family tree, what does this mean for them?  We now have a “Suspect” Common Patriarch that we can test against.  If other living male Allweiss’  on the other branches who descended along the Patriarchal line agree to be tested, we can determine whether there branch descends from this Patriarch, or if there branch split off earlier, and about when that would have been.  Our ability to solve this puzzle depends on the willingness and curiosity of the other Allweiss!

The public Allweiss website at  http://www.familytreedna.com/public/allweiss/ has information on how to join our project and order a test kit for a group discount.   You can join the Allweiss_Allweis project on that site, or if you have questions contact Patty Allweiss.