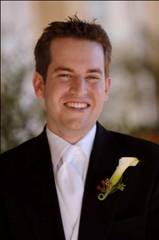 In Memory of Our Oldest Son

DAVID ALEXANDER ALLWEISS Dec. 15, 1982 – Dec. 13, 2005 David Allweiss, loving husband of Meghann, brother of Jonathan, son of Jack and Patty Allweiss, passed away after a two week hospitalization at Mission Hospital on December 13, 2005 of complications related to Acute Leukemia. David was a gifted student (GATE) at DePortola elementary and LaPaz Intermediate School in Mission Viejo, and an honor student at Mission Viejo High School. He was a member of the Model United Nations and Academic Decathlon teams. David was an Eagle Scout; he participated in many Scout service projects helping improve the community. He loved scout adventure activities and did several High Sierra hikes. He also did an 81 mile Philmont, New Mexico trek and Boy Scout National Jamboree. In David’s short life he did so much: race car driving at Buttonwillow and Laguna Seca, rock climbing, snorkeling, shooting, and kayaking. He loved to travel, and in addition to having visited 15 U.S. states, he traveled to Japan, Hong Kong, China, Switzerland, Italy, Israel, Jordan, England and Scotland. David graduated from Pepperdine University in Malibu in April of 2005 with a Bachelor of Arts in Business Administration. During his time at Pepperdine he was a member of the car club and participated in many on campus activities. He received a fellowship from Merrill Lynch while at Pepperdine. During high school David worked summers for Medicinenet.com (Internet) and LH Friend, Weinress & Presson (brokerage). During college he worked for Restoration Hardware (retail), Wells Fargo Bank (Private Client Services), and he tutored high school students in Malibu. He met Meghann Hunter, the love of his life, in 2002 and they were married at the Balboa Bay Club in Newport Beach on July 29th 2005. After graduating Pepperdine he was hired by Location Management Services in Mission Viejo as a Director of Operations, where he and the staff worked with major corporations on site selection issues. David enjoyed spending time with his beautiful new wife Meghann, working on cars, cycling with his dad, and visiting with their many friends. David was a wonderful and kind person. He loved and lived with his whole heart and spirit. He will be missed by his family, friends, and coworkers. We will remember him always. In lieu of flowers or gifts the family asks those who wish to make donations to The Leukemia Foundation, The City of Hope, and Mission Hospital. The family wishes to thank the Doctors, Nurses, and staff of Mission Hospital for their heroic and caring efforts on David’s behalf. A memorial service will be held at noon on Tuesday, December 27th at Pacific View Memorial Park Chapel, Corona Del Mar. It will immediately be followed by an interment ceremony in the Garden of Reflection. More information is at the Allweiss Family Website, www.hoa.org